"The new network allowed us to see in incredible detail where the faults are."
William Wilcock

A seismometer installed in 2013 atop Axial Volcano. The green plate transmits real-time data to the orange cable 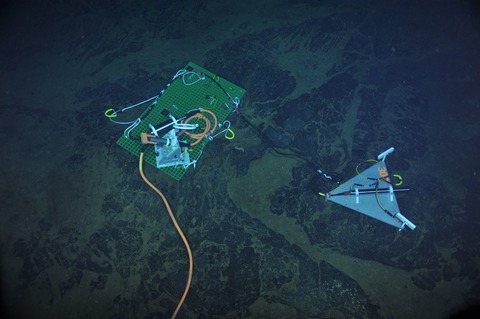 A seismometer (long black cylinder, right) installed in 2013 atop Axial Volcano. The green plate transmits real-time data to the orange cable and then back to shore as part of the National Science Foundation’s Ocean Observatories Initiative.

The cracking, bulging and shaking from the eruption of a mile-high volcano where two tectonic plates separate has been captured in more detail than ever before. A University of Washington study published this week shows how the volcano behaved during its spring 2015 eruption, revealing new clues about the behavior of volcanoes where two ocean plates are moving apart.

A seismometer (long black cylinder, right) installed in 2013 atop Axial Volcano. The green plate transmits real-time data to the orange cable and then back to shore as part of the National Science Foundation’s Ocean Observatories Initiative.University of Washington/OOI-NSF/CSSF-ROPOS

“The new network allowed us to see in incredible detail where the faults are, and which were active during the eruption,” said lead author William Wilcock, a UW professor of oceanography. The new paper in Science is one of three studies published together that provide the first formal analyses of the seismic vibrations, seafloor movements and rock created during an April 2015 eruption off the Oregon coast. “We have a new understanding of the behavior of caldera dynamics that can be applied to other volcanoes all over the world.”

The studies are based on data collected by the Cabled Array, a National Science Foundation-funded project that brings electrical power and internet to the seafloor. The observatory, completed just months before the eruption, provides new tools to understand one of the test sites for understanding Earth’s volcanism.

This depth map shows the raised outer edge (dark red) of Axial Volcano’s central caldera. Lava from the new 2015 eruption, at the northeast corner of the caldera and to the north, is outlined in green. Lava from the 2011 eruption is outlined in blue.John Delaney/Center for Environmental Visualization/University of Washington

“Axial volcano has had at least three eruptions, that we know of, over the past 20 years,” said Rick Murray, director of the NSF’s Division of Ocean Sciences, which also funded the research.  “Instruments used by Ocean Observatories Initiative scientists are giving us new opportunities to understand the inner workings of this volcano, and of the mechanisms that trigger volcanic eruptions in many environments.

“The information will help us predict the behavior of active volcanoes around the globe,” Murray said.

It’s a little-known fact that most of Earth’s volcanism takes place underwater. Axial Volcano rises 0.7 miles off the seafloor some 300 miles off the Pacific Northwest coast, and its peak lies about 0.85 miles below the ocean’s surface. Just as on land, we learn about ocean volcanoes by studying vibrations to see what is happening deep inside as plates separate and magma rushes up to form new crust.

The submarine location has some advantages. Typical ocean crust is just 4 miles (6 km) thick, roughly five times thinner than the crust that lies below land-based volcanoes. The magma chamber is not buried as deeply, and the hard rock of ocean crust generates crisper seismic images.

“One of the advantages we have with seafloor volcanoes is we really know very well where the magma chamber is,” Wilcock said. “The challenge in the oceans has always been to get good observations of the eruption itself.”

All that changed when the Cabled Array was installed and instruments were turned on. Analysis of vibrations leading up to and during the event show an increasing number of small earthquakes, up to thousands a day, in the previous months. The vibrations also show strong tidal triggering, with six times as many earthquakes during low tides as high tides while the volcano approached its eruption.

Once lava emerged, movement began along a newly formed crack, or dike, that sloped downward and outward inside the 2-mile-wide by 5-mile-long caldera.

Seismic clues show that before and during the eruption rock in the caldera moved along outward-sloping faults (black lines) as the volcano bulged and then collapsed. This type of fault had been suggested from models, but never before confirmed in this level of detail. Molten lava rose to the seafloor below the east rim of the caldera and then toward the north. “There has been a longstanding debate among volcanologists about the orientation of ring faults beneath calderas: Do they slope toward or away from the center of the caldera?” Wilcock said. “We were able to detect small earthquakes and locate them very accurately, and see that they were active while the volcano was inflating.”

The two previous eruptions sent lava south of the volcano’s rectangular crater. This eruption produced lava to the north. The seismic analysis shows that before the eruption, the movement was on the outward-dipping ring fault. Then a new crack formed, initially along the same outward-dipping fault below the eastern wall of the caldera. The outward-sloping fault has been predicted by so-called “sandbox models,” but these are the most detailed observations to confirm that they happen in nature. That crack moved southward along this plane until it hit the northern limit of the previous 2011 eruption.

Seismic instruments (black squares) recorded vibrations during the eruption, and scientists traced that activity back to its original time and place. Brown and red dots show earthquakes before and during the April 2015 eruption, and purple dots show seismic explosions in weeks afterward. Purple patches show new lava flows from the 2015 event.

“In areas that have recently erupted, the stress has been relieved,” Wilcock said. “So the crack stopped going south and then it started going north.” Seismic evidence shows the crack went north along the eastern edge of the caldera, then lava pierced the crust’s surface and erupted inside and then outside the caldera’s northeastern edge.

The dike, or crack, then stepped to the west and followed a line north of the caldera to about 9 miles (15 km) north of the volcano, with thousands of small explosions on the way.

“At the northern end there were two big eruptions and those lasted nearly a month, based on when the explosions were happening and when the magma chamber was deflating,” Wilcock said.

The activity continued throughout May, then lava stopped flowing and the seismic vibrations shut off. Within a month afterward the earthquakes dropped to just 20 per day.

The volcano has not yet started to produce more earthquakes as it gradually rebuilds toward another eruption, which typically happen every decade or so. The observatory centered on Axial Volcano is designed to operate for at least 25 years.

“The cabled array offers new opportunities to study volcanism and really learn how these systems work,” Wilcock said. “This is just the beginning.”

"The new network allowed us to see in incredible detail where the faults are."
William Wilcock

A seismometer installed in 2013 atop Axial Volcano. The green plate transmits real-time data to the orange cable

A seismometer (long black cylinder, right) installed in 2013 atop Axial Volcano. The green plate transmits real-time data to the orange cable and then back to shore as part of the National Science Foundation’s Ocean Observatories Initiative.

Earthquakes and Volcanoes along Alaska Peninsula

A new seafloor observatory operated by the University of Washington is providing unprecedented detail about the possible eruption of a submarine volcano off the Northwest coast.