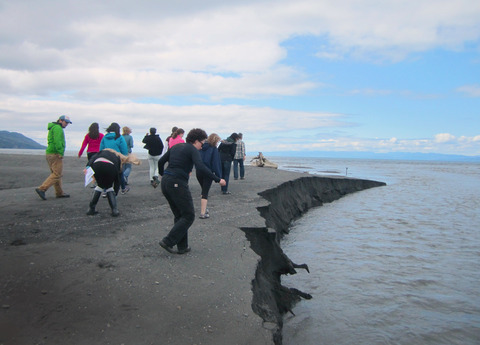 It’s a really in-depth research experience, something you probably wouldn't get anywhere else. Julia Dolan

Posted with images at http://www.washington.edu/news/2014/08/01/a-unique-lab-class-uw-students-explore-nations-largest-dam-removal/

A group of Washington state students spent their spring looking at the effects of the largest dam-removal project in history, now underway on the Olympic Peninsula. They worked alongside University of Washington oceanographers studying what a century's worth of accumulated mud, stones and debris are doing to the marine environment.
Students spent the spring living at the UW's Friday Harbor Laboratories for a 10-week research apprenticeship course. It began with lectures that introduced them to ideas of waves and tides and how they affect particle movement. By the end, each student had completed a research project looking at how shorelines and marine habitats are adapting to the dramatic changes.


"The cruise has been the best part – being out in the field and getting data," said Hannah Besso, a sophomore in environmental science at Western Washington University. She was among four of the nine students who came from another university, since the research apprenticeship credits can be applied at other institutions.


The class spent five days at sea aboard the UW's research vessel Clifford A. Barnes, helping with an ongoing research effort. They hauled up seafloor instruments, cleaned them and retrieved data before lowering them back to seafloor posts for another season. The group also collected roughly 60 seafloor sediment samples, and about as many along the shoreline, to analyze for grain size back at Friday Harbor Labs. The grain size can reveal how processes are moving particles around in the water, and where the different grains end up matters for plants and animals that live on the seabed.
Most students arrived with some background in environmental science, but that was not required. The undergraduate curriculum included a crash course in geology, weekly field trips, two cruises and an overnight campout near where one of the two dams once stood.


Teaching the course is a huge time commitment, acknowledged lead instructor Andrea Ogston, a UW associate professor of oceanography. But she said it's worth the effort.


"Bringing what I do to a group of students who have not ever thought about the mud at the bottom of the ocean – it motivates me and it refreshes me," Ogston said. "It brings me energy."


The sediment dynamics class has been offered three times before. This year it included co-instructor Ian Miller, a Washington Sea Grant marine scientist based in Port Angeles, who has been monitoring the river mouth and advised students working on projects along the shoreline, his area of expertise.


Ogston and Chuck Nittrouer, a UW professor of marine geology, have a National Science Foundation grant to study changes to the ocean floor as sediment washes down the newly free-flowing river. They are looking for huge sediment flows that might duplicate what can happen during an extreme river flood, landslide or large earthquake.
Graduate students in their research group helped teach the course, give guest lectures and advise the students on their individual projects.


"It’s really cool to learn just for the sake of knowledge," said Sarra Tekola, a UW senior in environmental science. Her project involved calculating how much carbon is being released by the dam removal.


"This is where you get to carry out a research project from start to finish, without the other time constraints of having to take other classes on top of it," Tekola said. "It's been an amazing opportunity."


Julia Dolan, a junior in environmental science at UW Tacoma, literally dug down as far as she could into the beach to try to figure out what processes have built up the shoreline during the more than two years since the dam demolition began.
"Planning an experiment, collecting the data, analyzing that data," Dolan said. "It’s a really in-depth research experience, something you probably wouldn’t get anywhere else."


Students analyzed their data and wrote up the results before the class ended in early June. Some hoped to submit them for publication. Others plan to use it on a résumé, or to see if they would enjoy graduate school.
Ogston agrees that both the study site and class setting are exceptional.


"Friday Harbor Laboratories is probably the only place where you could do an undergraduate educational experience at this level," Ogston said. "This complete immersion, where we're living next to each other and the labs, the boats are right here, the instructors are always available. That couldn't happen anywhere else."

It’s a really in-depth research experience, something you probably wouldn't get anywhere else. Julia Dolan

The Elwha River mouth and the salt water around it served as a classroom earlier this month as University of Washington students studied how millions of cubic yards of sediment are interacting with the surrounding environment.

Salmon are beginning to swim up the Elwha River for the first time in more than a century. But University of Washington marine geologists are watching what’s beginning to flow downstream.

Elwha River Dam Removal: Check out the mud in the Strait!

You have probably all read in the newspaper about the Elwha River dam removal that is in progress. The major story we hear concerning the purpose