VISIONS'18 Research Cruise - Off to Sea We Go 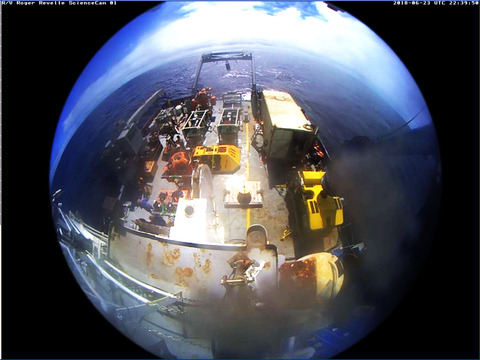 The UW Cabled Array team from the School of Oceanography and the Applied Physics Laboratory will once again have an exciting summer in the NE Pacific maintaining the National Science Foundations’ Regional Cabled Observatory. This summer’s 47-day expedition is especially exciting because we will be adding novel sensors to continue to monitor the highly active submarine volcano off our coast – Axial Seamount that erupted in 2015 and is poised to do so again!

The volcano, >300 miles offshore and nearly 1 mile beneath the oceans surface, is rumbling awake again with over 600 earthquakes in 1-day late April. The summit continues to inflate as melt migrates into the shallow magma reservoir beneath the volcano. Based on heights of the seafloor at the summit of Axial, prior eruptions and the rate that the summit of the volcano is expanding, Axial may erupt in the 2020-2021 time frame. The 2015 eruption resulted in a >400 ft thick lava flow (equivalent to ~ 2/3 up the height of Seattles' Space Needle).

The cruise will use the remotely operated vehicle (ROV) Jason from Woods Hole Oceanographic Institution onboard the R/V Roger Revelle operated by Scripps Institution of Oceanography. Excitement is building as our equipment is fully tested, safely packed away, and now on its way via numerous trucks to Newport, Oregon where we will begin mobilizing the ship the third week of June. Over 20 US and international undergraduate and graduate students will join us on this expedition, working side-by-side scientists, engineers, and the ship and ROV teams.

Similar to previous O& M cruises, this expedition is highly complex with a diverse array of >100 instruments, junction boxes, and instrumented pods on the Shallow Profiler Moorings to be recovered, installed, and tested. The cruise will also include recovery and reinstallation of cabled Deep Profiler Moorings that reach ~10,000 feet beneath the oceans surface. The ship will be “packed to the gills” on each of the four legs that make up this expedition, carrying everything from state-of-the-art mooring components to sharpies.

You will be able to watch our underwater operations live through streaming video as the ROV Jason works 1) >300 miles off shore and 5000 ft down at the summit of Axial Seamount, an active volcano hosting numerous deep-sea active hot spring deposits associated with some of the most bizarre creatures on Earth; 2) offshore Newport, Oregon to depths of ~250 ft to 10,000 ft in some of the most biologically productive waters in the oceans; and 3) sedimented sites on the Cascadia margin where methane-rich plumes jet from the seafloor. Here, the methane seeps support dense bacterial mats and giant clams that thrive in the absence of sunlight on gases migrating through the seafloor. Two new instruments funded by the University of Bremen will allow real time imaging of the methane plumes to understand how much methane issues from the seafloor, and their temporal and spatial variability. This is a new international collaboration that expands the capability of the Cabled Array and provides new imagery of these dynamic systems to all users.

An enhanced, high-bandwidth satellite connection from the R/V Revelle will allow you to experience our deep-sea operations through live video streams to shore and onto the Internet at the speed of light. It will also allow scientists onboard to see data as new instruments are connected to the seafloor submarine fiber optic cables that provide an ocean Internet. During the cruise, engineers from the Applied Physics Lab will man an operations center in the School of Oceanography where they will communicate directly with the instruments as they are installed, turn power on an off, and command and control instruments from hundreds of miles away and far offshore (including a resident cabled high definition camera that will stream video live from Axial Seamount throughout the year). All total, the system hosts > 140 instruments that stream data at the speed of light in real-time to shore 24/7, where they are stored and visualized through the OOI Cyberinfrastructure system at Rutgers University.

As always, it will be great to be away from the dock, smell the salt air again, and work beneath the waves on some of the most advanced technology in the oceans. For many students, these expeditions have changed their lives.