Take a virtual voyage to the Arctic ocean 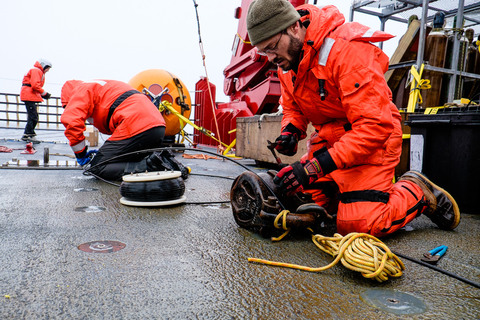 “The Beaufort Sea has seen some of the most dramatic losses in sea ice since the early 1980s,” John Mickett

If you’ve ever wanted to travel north of the Arctic Circle in early fall, when the expanse of water dotted with ice floes reaches its greatest extent, this is your chance.

A University of Washington oceanographer is one of three principal investigators on a monthlong research cruise to the Beaufort Gyre. The researchers are posting updates, photos and videosof their study of Arctic Ocean mixing through Sept. 26.

“The Beaufort Sea has seen some of the most dramatic losses in sea ice since the early 1980s,” said John Mickett, an oceanographer at the UW Applied Physics Laboratory, wrote by email last week from the ship. “Since we’re trying to understand the ocean factors that influence the rapid loss of late-summer sea ice, this is the place to be.”

The cruise is aboard the RV Sikuliaq, a new U.S. research vessel that can break through up to 2.5 feet of ice. The effort jointly led by the Scripps Institution of Oceanography and the UW aims to better understand how heat is transferred to melt the sea ice, and how wind energy churns up the water, especially during late-summer storms.

The two main tools the scientists are using were developed at the UWApplied Physics Laboratory:

Mike Gregg, a UW emeritus professor of oceanography who led the development of those tools, came out of retirement to join the cruise. His group’s research on small-scale ocean mixing has helped inform the physics used in global climate models and Arctic Ocean forecasts. The observations from this cruise may help improve those projections.

The scientists are also recording temperature and pressure in the upper 60 feet of water many times per second to understand the fine-scale features around the melting ice; anchoring a string of instruments to the ocean bottom to collect observations throughout 2.3 miles (3.7 km) of water depth; and attaching instruments to the ship to measure water currents at various scales.

But enough about the science. Just get a vicarious kick of this scientific adventure thanks to Seattle videographer Faith Haney, who is posting video updates from the ship. Watch the team’s first glimpses of Arctic ice:

Other principal investigators are chief scientist Jennifer MacKinnon, a Scripps scientist who earned her doctorate in 2002 from the UW, andMatthew Alford, a former UW researcher who is now on the faculty at Scripps. The research is funded by the National Science Foundation.

Once this team gets back to shore, it will hand the ship over to another UW oceanographer who will lead the Sikuliaq’s next cruise. Jim Thomson, an oceanographer with the UW Applied Physics Laboratory, is chief scientist on a 45-day multi-institutional cruise that will go back to the Beaufort Sea. TheArctic Sea State project, Oct. 1 through Nov. 10, is funded by the U.S. Office of Naval Research. It will be another technology-heavy project that builds on a UW-led effort last year monitoring the physics at the ice edge.

Thomson has previously researched the emergence of big waves in the Arctic Ocean. His project this year will further explore how heat and momentum move through the system during autumn storms.

“The Beaufort Sea has seen some of the most dramatic losses in sea ice since the early 1980s,” John Mickett

Robotic floats built at the University of Washington to brave the world's harshest ocean to help understand its role in the global climate.