Many vitamins, including B-12, are elusive in the ocean environment.

The dominant paradigm has been bacteria are out there, making B-12, but it turns out that one of the most common marine bacteria doesn't make it," Anitra Ingalls 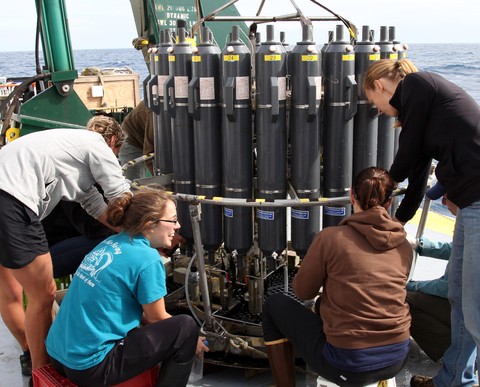 by Hannah Hickey
University of Washington

The phrase, 'Eat your vitamins,' applies to marine animals just like humans. Many vitamins, including B-12, are elusive in the ocean environment.

University of Washington researchers used new tools to measure and track B-12 vitamins in the ocean. Once believed to be manufactured only by marine bacteria, the new results show that a whole different class of organism, archaea, can supply this essential vitamin. The results were presented Feb. 24 at the Ocean Sciences meeting in Honolulu.

"The dominant paradigm has been bacteria are out there, making B-12, but it turns out that one of the most common marine bacteria doesn't make it," said Anitra Ingalls, a UW associate professor of oceanography.

All marine animals, some marine bacteria and some tiny marine algae, or phytoplankton, need B-12, but only some microbes can produce the large, complex molecule. So like human vegetarians on land, marine organisms may be scouring for food that can help stave off vitamin deficiency.

"If only certain bacteria can make B vitamins, that can make B-12 a controlling factor in the environment. Is it present or not?" said Katherine Heal, a UW oceanography graduate student. "Studying the marine microbiome can help us understand what microbial communities could be supported where, and how that affects things like the ocean's capacity to absorb atmospheric CO2."

The UW team is the first to show that marine archaea, a single-celled organism that evolved totally separate from bacteria and all other living things, are making B-12. Relatives of these tiny critters are known for unusual behavior like living inside hot springs and underwater volcanoes.

The Seattle team managed to grow a common type of open-ocean archaea in the lab, no mean feat, and show that it not only makes enough B-12 to support its own growth but can supply some to the environment.

"It's hard to quantify their contribution," Ingalls said. "This is a first glimpse at their potential to contribute to this pool of vitamins."

The analysis was done at a new UW marine chemistry center that does detailed analysis of proteins and other carbon-based chemicals in the ocean. The researchers used high-tech tools, including liquid chromatography and mass spectrometry, to identify the tiny amount of vitamins among all the dissolved matter and salt in the seawater. The UW method is unique in that it is the only one that can distinguish among the four forms of B-12 vitamins.

Field experiments involved sampling seawater in Hood Canal, near Seattle, and in the Pacific Ocean hundreds of miles offshore. The results showed that B-12 was present in small amounts in all water samples. Concentrations were low enough in some places that vitamin deficiency among tiny marine algae, or phytoplankton, is likely.

The next step, researchers said, is to connect different microbes' activity with the production of B vitamins, to see which organisms are responsible where, and to look at how ocean vitamins affect the type and amount of phytoplankton growing in the water.

Recent sequencing of the genomes of marine microbes has revealed genetic pathways in bacteria and archaea for creating B vitamins, but just because the gene is there doesn't mean it's being used. Marine microbes often adapt their behavior depending on the environment. In the case of vitamins, some bacteria make more B-12 if a phytoplankton is nearby, supporting their eventual food source.

Making a B-12 vitamin, which has a metal core and complex surrounding structure, involves 30-some steps.

"People think that's why many organisms have lost it from their genomes," Heal said. "It's just too expensive to make it, and it's easier to get it from food."

The UW team hopes to learn which microbes are producing B-12 vitamins where, to better understand how the base of the marine food web works, how it might alter in a changing environment, how oceans might help regulate atmospheric carbon dioxide, and where marine animals could go to get a well-balanced diet.

"The public really has a very strange relationship to microorganisms," Ingalls said. "People know they cause disease, so they want to kill them. But they're also the only reason that we – or whales, fish or coral reefs – are alive."

Collaborators are David Stahl, E. Virginia Armbrust, Allan Devol, Wei Qin and Laura Carlson at the UW, James Moffett at the University of Southern California and Willow Coyote, an undergraduate from Evergreen State College who will also present a poster at the meeting. The work was funded by the National Science Foundation.

The dominant paradigm has been bacteria are out there, making B-12, but it turns out that one of the most common marine bacteria doesn't make it," Anitra Ingalls

Vitamin B-12, and a knockoff version, create complex market for marine vitamins

Scientists coax shy microorganisms to stand out in a crowd