"Warm blob' in Pacific Ocean linked to weird weather across the U.S. 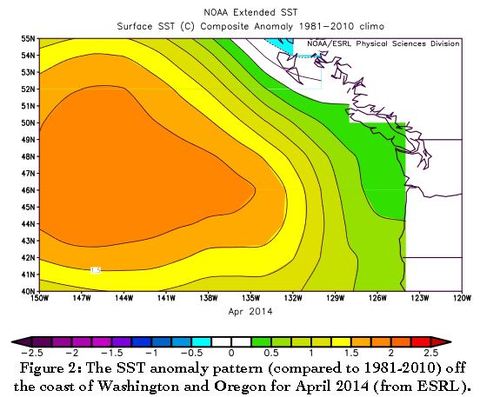 This is a taste of what the ocean will be like in future decades, Nick Bond

The one common element in recent weather has been oddness. The West Coast has been warm and parched; the East Coast has been cold and snowed under. Fish are swimming into new waters, and hungry seals are washing up on California beaches.

A long-lived patch of warm water off the West Coast, about 1 to 4 degrees Celsius (2 to 7 degrees Fahrenheit) above normal, is part of what's wreaking much of this mayhem, according to two University of Washington papers to appear in Geophysical Research Letters, a journal of the American Geophysical Union.

"In the fall of 2013 and early 2014 we started to notice a big, almost circular mass of water that just didn't cool off as much as it usually did, so by spring of 2014 it was warmer than we had ever seen it for that time of year," said Nick Bond, a climate scientist at the UW-basedJoint Institute for the Study of the Atmosphere and Ocean, a joint research center of the UW and the U.S. National Oceanic and Atmospheric Administration.

Bond coined the term "the blob" last June in his monthly newsletter as Washington's state climatologist. He said the huge patch of water – 1,000 miles in each direction and 300 feet deep – had contributed to Washington's mild 2014 winter and might signal a warmer summer.

Ten months later, the blob is still off our shores, now squished up against the coast and extending about 1,000 miles offshore from Mexico up through Alaska, with water about 2 degrees Celsius (3.6 degrees Fahrenheit) warmer than normal. Bond says all the models point to it continuing through the end of this year.

The new study explores the blob's origins. It finds that it relates to a persistent high-pressure ridge that caused a calmer ocean during the past two winters, so less heat was lost to cold air above. The warmer temperatures we see now aren't due to more heating, but less winter cooling.

Co-authors on the paper are Meghan Cronin at NOAA in Seattle and a UW affiliate professor of oceanography, Nate Mantua at NOAA in Santa Cruz and Howard Freeland at Canada's Department of Fisheries and Oceans.

The authors look at how the blob is affecting West Coast marine life. They find fish sightings in unusual places, supporting recent reports that West Coast marine ecosystems are suffering and the food web is being disrupted by warm, less nutrient-rich Pacific Ocean water.

The blob's influence also extends inland. As air passes over warmer water and reaches the coast it brings more heat and less snow, which the paper shows helped cause current drought conditions in California, Oregon and Washington.

The blob is just one element of a broader pattern in the Pacific Ocean whose influence reaches much further – possibly to include two bone-chilling winters in the Eastern U.S.

A study in the same journal by Dennis Hartmann, a UW professor of atmospheric sciences, looks at the Pacific Ocean's relationship to the cold 2013-14 winter in the central and eastern United States.

Despite all the talk about the "polar vortex," Hartmann argues we need to look south to understand why so much cold air went shooting down into Chicago and Boston.

His study shows a decadal-scale pattern in the tropical Pacific Ocean linked with changes in the North Pacific, called the North Pacific mode, that sent atmospheric waves snaking along the globe to bring warm and dry air to the West Coast and very cold, wet air to the central and eastern states.

"Lately this mode seems to have emerged as second to the El Niño Southern Oscillation in terms of driving the long-term variability, especially over North America," Hartmann said.

In a blog post last month, Hartmann focused on the more recent winter of 2014-15 and argues that, once again, the root cause was surface temperatures in the tropical Pacific.

That pattern, which also causes the blob, seems to have become stronger since about 1980 and lately has elbowed out the Pacific Decadal Oscillation to become second only to El Niño in its influence on global weather patterns.

"It's an interesting question if that's just natural variability happening or if there's something changing about how the Pacific Ocean decadal variability behaves," Hartmann said. "I don’t think we know the answer. Maybe it will go away quickly and we won't talk about it anymore, but if it persists for a third year, then we'll know something really unusual is going on."

Bond says that although the blob does not seem to be caused by climate change, it has many of the same effects for West Coast weather.

"This is a taste of what the ocean will be like in future decades," Bond said. "It wasn't caused by global warming, but it's producing conditions that we think are going to be more common with global warming."

This is a taste of what the ocean will be like in future decades, Nick Bond

Why the Antarctic Ocean hasn't warmed

The warmer water temperatures will speed up metabolic need for oxygen, but warmer water will hold less of the oxygen.

Eric D’Asaro and Craig Lee of the UW Applied Physics Laboratory and the UW School of Oceanography, designed the float and glider instruments, which track microscopic plants

A problem of global scale requires everyone: from physicists to physicians, marine biologists to atmospheric chemists, ice to fire ecologists, from the soil to the upper atmosphere, it takes us all.