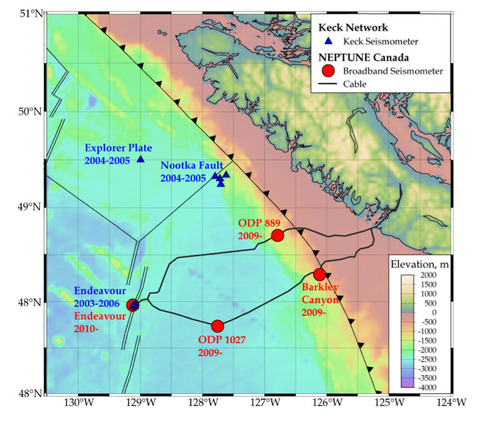 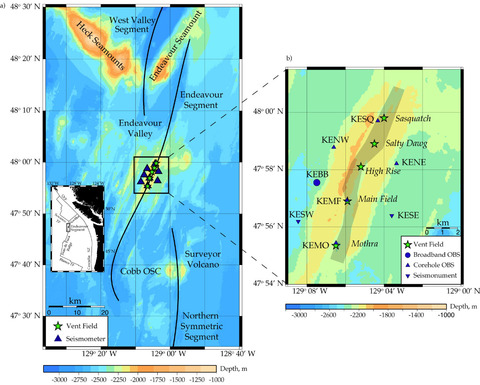 About a decade ago the W. M. Keck foundation funded a seafloor experiment investigating the relationships between episodic deformation, seafloor venting, and microbial productivity. The goal was to use the experiment as a prototype for the cabled ocean bottom observatories planned by both the US and Canada. A multidisciplinary suite of instruments, including eight ocean bottom seismometers, was deployed around the vigorous black smoker fields of the Endeavour segment of the Juan de Fuca mid-ocean Ridge. The network recorded thousands of earthquakes including two major swarms in 2008 that perturbed the hydrothermal systems. The seismologists were surprised to find that the Keck dataset also contained a rich record of fin whale vocalizations. One key premise that justifies the expense of long-term seafloor observations is the likelihood of unanticipated uses of the data. With funding from the Office of Naval Research (ONR), William Wilcock’s group adapted methods common to earthquake studies to isolate and locate the fin whale calls. This research was recently highlighted both in the American Geophysical Union (AGU) blog and in a ScienceNOW article.

The work at Endeavour has lead to a continued interest in seismic records from neighboring sites. Expanding the analysis to longer times scales and a larger region will provide details on the distribution and movements of fin whales and constrain linkages to environmental conditions. The cabled observatories of Neptune Canada and Regional Scale Nodes of the Ocean Observatory Initiative will provide decadal records at selected sites off the northwest coast of the United States and Canada, while the Cascadia Initiative will expand the spatial coverage to the entire Juan de Fuca plate with a four-year deployment of 70 ocean bottom seismometers.