The Arctic seas are changing. We are seeing and hearing more species, farther north, more often. And that’s a trend that is going to continue. Kate Stafford 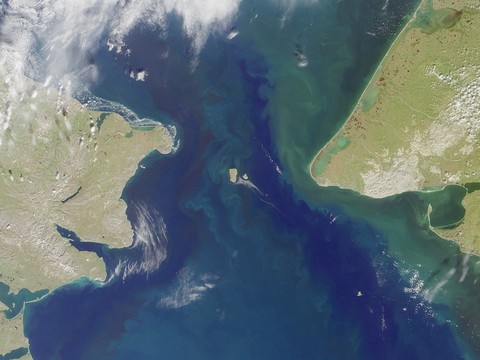 The Bering Strait is a shallow, 58-mile-wide channel between Russia and Alaska that connects the Pacific and Arctic oceans. The Chukchi Sea is to the north, and the Bering Sea is to the south. NASA

by: Hannah Hickey
University of Washington


The Arctic is home to a growing number of whales and ships, and to populations of sub-Arctic whales that are expanding their territory into newly ice-free Arctic waters.

A study of the narrow passage of the Bering Strait uses underwater microphones to track the whales by their sounds. Three years of recordings reveal more detections of both Arctic and sub-Arctic whales traveling through the narrow choke point.

Kate Stafford, an oceanographer with the University of Washington's Applied Physics Laboratory, will present the results Feb. 26 at the Ocean Sciences meeting in Honolulu.

The recordings show Arctic beluga and bowhead whales migrating seasonally through the region from the Arctic south to spend winter in the Bering Sea. They also detect large numbers of sub-Arctic humpback, fin and killer whales traveling north through the Bering Strait to feed in the biologically rich Chukchi Sea.

"It's not particularly surprising to those of us who work up in the Arctic," Stafford said. "The Arctic seas are changing. We are seeing and hearing more species, farther north, more often. And that's a trend that is going to continue."

Stafford placed microphones below the water's surface and recorded in summer and early winter from 2009 to 2012 as part of a U.S.-Russian scientific collaboration. Melodious humpback whale songs showed up regularly on recordings into late fall. Fin and killer whales, which are southern species that seldom travel into Arctic waters, were heard into early November.

"These animals are expanding their range," Stafford said. "They're taking advantage of regions in seasons that they may not have previously."

The recordings also picked up ships using the ice-free summers to travel through two international shipping lanes. This poses an increased risk of collisions between whales and ships, and of noise pollution.

"Marine mammals rely primarily on sound to navigate, to find food and to find mates. Sound is their modality," Stafford said. "If we increase the ambient sound level, it has the potential to reduce the communication range of cetaceans and all marine mammals."

The Bering Strait is famous as a land bridge that prehistoric humans used to travel from Russia to North America. Today, the waterway is 58 miles wide and maximum 160 feet deep, with about one-third of its span in U.S. waters and the rest in Russia. The two coasts are quite different, Stafford said, which makes the international collaboration essential to understanding the full environment.

A recent paper by Stafford and other scientists includes visual sightings of killer whales, a quieter southern-dwelling whale, just north of the strait in the southern Chukchi Sea. Killer whales are now seen fairly regularly in this area, which is being considered for oil and gas exploration.

Stafford supports the idea of slowing ship speeds in the Bering Strait, reducing motor noise and the chance of ship strikes.

Still to be explored is whether the increased whale travel through the region is due to rising whale populations, expanded ranges, or both. Logbooks from Soviet whaling ships in the mid-to-late 20th century report sub-Arctic whales in the region, but none were seen from about 1980 to 2010.

"The question is, are these whale populations recovering and so they're reoccupying former habitat, or are they actually invading the Arctic because they can, because there is less seasonal sea ice?" Stafford said.

The Arctic seas are changing. We are seeing and hearing more species, farther north, more often. And that’s a trend that is going to continue. Kate Stafford

The Bering Strait is a shallow, 58-mile-wide channel between Russia and Alaska that connects the Pacific and Arctic oceans. The Chukchi Sea is to the north, and the Bering Sea is to the south. NASA

Oceanographer's Underwater microphones Eavesdrop on the Secret Lives of Whales

University of Washington and NASA confirms that snow has thinned significantly in the Arctic, particularly on sea ice in western waters near Alaska.